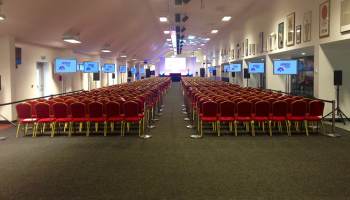 The East stand, sponsored by Allianz Insurance, was refurbished and re-opened in January 2013. However, since then it had received little or no attention, so a full site survey was undertaken on this building. Home to one of the largest sporting bars in world rugby at 110m long and 16m wide, with a 6 lane running track and capable of holding 2000 people for conferencing (when not in use), together with the remaining banqueting suites, corporate boxes, and communal spaces, a full redecoration proposal was submitted to the stadium Director.

Saracens opted to accept our 6 year maintenance programme, allowing for a full initial repaint and subsequent annual visits. Work is expected to take 3 months to complete, and the decision to accept our proposal was based around a specification utilising the Johnstones Endura Super Durable Matt - allowing for ease of application and ongoing annual maintenance - together with traditional oil based eggshells in the high traffic bar area. Work commenced from October 2016 and had to be scheduled around an extensive programme of home matches.