@ RT @HankinsonGroup: How do you #work #safely during #COVID19? The #newnormal means new processes in #property #maintenance. https://t.co/XT…

@ RT @HankinsonGroup: Worried about #property #maintenance during #coronavirus? Here are nine reasons not to. https://t.co/9vxiNzLQHB https:/…

@ RT @HankinsonGroup: Our #FreeSchoolMeals initiative with Unitas makes the local Stoke-on-Trent newspaper, The Sentinel. Read all about it…

Whittle Recognised With Award Nominations Back

We were delighted that Whittle were shortlisted in the Specialist Contractor of the Year category for the 2015 Building Awards organised by Building Magazine. This was the 21st year of the awards which are recognised as the most prestigious in the Construction Industry.  They are always hotly contested and recognise the best in the Industry.

The award ceremony took place at the Grosvenor House, London on 22nd April.  It was a glittering black tie event attended by over 1200 of the Construction Industry’s great and good.  The evening was hosted by TV's David Walliams of Britains Got Talent and Little Britain Fame.

Stephen Hankinson Group Chief Executive said “To be a finalist in this competition which aims to recognise success and innovation is a tremendous achievement and a recognition for all the hard work that the team has put in.”  He added “I believe that this is also recognition for our continued development of the long term programme model where we remain the number one provider in the UK.”

Further good news……..the transformation contract for the Holiday Inn, Royal Route, Wembley undertaken by Whittle has been nominated for 2 awards and has reached  both the final stage of Paint Manufacturer’s  PPG prestigious Painter of the Year Awards and the Painting Decorating Association Annual Trophy Awards   The contract was to clean and repaint all exterior surfaces of the hotel to improve the overall look and the client has been delighted with how their hotel now stands out from the crowd. The winner of the PPG Awards will be announced at a ceremony to be held at Celtic Manor, South Wales on 16th May and the winner of the PDA Awards will be announced at a ceremony in Plaisters Hall, London on 9th July. 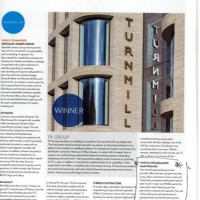